When the itch to go out on your own first strikes you, I want you to first think of your transition in phases.

Have Realistic Initial Ideas for Your Bridge

Think about how you’re first going to step out and make a name for yourself in your new ventures. Draw out a Venn diagram of what you’ve built a resume doing and what you want to do. Where do they overlap? That is where you build your bridge.

For example, I knew it would be a pretty big leap for me to go from be a data analyst to suddenly pushing my marketing company–especially with virtually no portfolio to speak of. So, I had to think of what that bridge could be.

I started first by looking at data analytics jobs that were focused on marketing data, so I could at least be in the right environment to pick up on some things and add some projects to my resume.

Next, I had to think about how I could monetize such bridge independent of a job, which brings me to my next point.

2. How will you monetize it? (Get creative)

I gained a sense of what marketing strategies and tools work by having examined the data resulting on the other end for so long during my initial stint on the bridge. I had consistently looked for opportunities to work on data while learning larger marketing strategies, such as attacking SEO, building strong, clean websites, learning graphic design concepts and programs, etc..

These efforts lead to some side work for people who couldn’t yet afford a more seasoned professional. So, I started using the experiences I gained from working on marketing projects (even though I was running the data analytics) to dabble even further in marketing work. This gave me the chance to add more full-breadth marketing experiences to my resume.

And, as I got into further stages of my transition to independence and curving my cube, I was able to build on that more and more, adding more clients as I had more to show on my portfolio. Eventually, my marketing skills grew enough to take that full leap to break free (upcoming post on that!).

But, what was important was first figuring out what I wanted to do, getting creative about the bridge I could build between that and what I WAS doing, and monetizing my independence in stages.

And, throughout your transition (and I’m going to drive this into your head over and over again because it is one of my top tips, so listen close), write down your “why” list and build on it. I went into detail on this on episode 114; so, rewind back, if you missed it. But, building your “why” list and continuing to add to it as you go and grow is essential!

Have Realistic Timelines and Goals

I IMPLORE YOU to PLEASE keep in mind once your switch has flipped, that you are going to have to replace the income you are currently making before you make any kind of transition out of your current situation. So, keep from burning bridges both before and during your transition, so you can make the move as much on your terms as possible. (I mean, you don’t want to be asked to leave before you are financial ready, do you??)

Trust me on this one. You do NOT want to do what I did. I was so obsessed with getting the heck outta dodge when I first flipped the switch, that I made a lot of mistakes and allowed things to falter at work. Rather, stay engaged and at least pretend to still care (even if it takes real effort), so that YOU make the final decision on when it is the right time for you to leave.

In my case, I was helping the KVJ Show with the campaign to get them back on the air to such an extent, that it was consuming my days. I would rush out to talk to them on the phone when they needed me and would pay entirely toooooo much attention to what was happening on social media with the campaign. In my defense, I was at the helm, and it took all my attention to not have it balloon out of control. But, if I had it to do over again with 20/20 hindsight, I wouldn’t have cared more about their bottom line than my own. THAT was my mistake. And, I paid a huge price for that.

I spent many late nights building my business and my podcast. MANY… LATE… NIGHTS! But, I don’t regret any of that. And, I don’t regret leaving the company I was at when I first flipped the switch and started to curve my cube. But, I do regret the manner in which I let that job fall by the wayside while I was still there. That wasn’t cool of me, and I shifted too much of my focus all at once. So, be careful of that.

Simply said: Don’t burn bridges on your way out. That is no bueno!!

And, that is today’s Learning Curve.

Listen to my full episode with Jules Pierre-Louis! 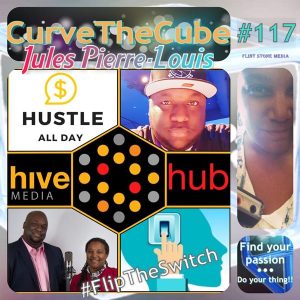